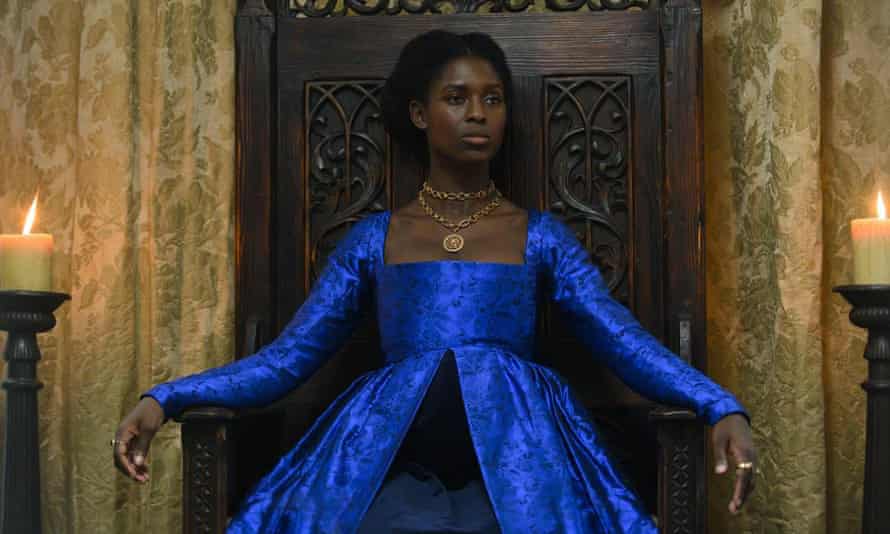 In the best-known portrait purported to be of Anne Boleyn, a square neckline frames her long, slender neck, foreshadowing her grisly date with the executioner at the Tower of London in 1536.

Debates about Boleyn’s appearance – and how many fingers she had – have raged for centuries and no uncontested contemporary portraits of her survive. But most historians agree that her style of dress, which was influenced by her early life in France, set trends in the English court. She is often depicted wearing a low square neckline, a French-influenced style that came to dominate Tudor dress.

Now, as a new dramatisation of Boleyn’s life comes to TV, the square neckline associated with Henry VIII’s ill-fated second wife is having a fashion renaissance – 500 years on, it’s once again hip to be square.

Tudor-style square necks have appeared on the catwalks of Bottega Veneta, Ganni, Molly Goddard, Shrimps and Rejina Pyo, often used by designers as a counterpoint to ruffled sleeves and voluminous dresses. Asos has an eye-watering 2,018 square-necked styles for sale. Searches for “square neck” are up 42% since February on the resale site Depop and up 63% quarter-on-quarter at the fashion shopping app Lyst. Reformation’s £?248 Sigmund dress – which pairs a very Boleyn-ish neckline with a modern thigh split – is one of the app’s most searched for dresses.

In a year in which period dramas have had an elevated fashion influence, with TV replacing all other social activities, square necks have been omnipresent. A ravishing emerald green dress with a square neck was a central plot point of the sumptuous film Portrait of a Lady on Fire, while the square Regency neckline – with its attendant quivering bosoms – played a starring role in Netflix’s smash hit show Bridgerton.

In the upcoming depiction of Boleyn’s life, which stars Jodie Turner-Smith and airs on Tuesday at 9pm on Channel 5, the square necklines are even more prominent. They are worn by all the female members of the cast, in eye-catching block colours. “I made a decision not to have any embellishments or embroidery around the neckline, which amplifies the neckline and heightens the severity of the cut in a way that really pops on camera,” said the show’s costume designer, Lynsey Moore.

She took inspiration from modern catwalks – including the jewelled tones of the designer Christopher John Rogers, and Prada headbands for sleek reinterpretations of another of Boleyn’s favourites, the French hood – as well as tapestries and Hans Holbein paintings. “The costumes are not historically accurate, by any means,” said Moore, “but the Tudor essence of the silhouette is there, with a modern spin on it.” Moore, who was lauded for her work on Michaela Coel’s I May Destroy You, believes the composition of Boleyn’s most famous portrait is part of the reason she is still so associated with the style, “because it’s not a full-length painting, as we have with Elizabeth I, we literally only see that much: the square neckline and the famous initial B necklace”.